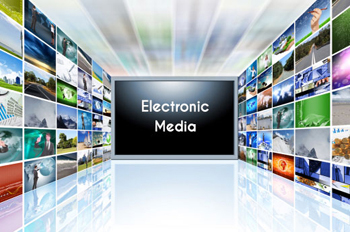 In this era of modernization, everything is shifting towards technology. Media as a sector has also upgraded, earlier, people ardently waited till morning for being updated about current affairs and events happening in the world this was during the period of newspapers and radios. But today with electronic media in the form of television and mobile applications have changed the game entirely.

The rise of Electronic Media is so rapid that currently there are 389 News Channels in India which bestows viewers' with vast diversification of news in all the languages and spheres, with 20 news channels in Andhra Pradesh, alone. Traditional media services have taken a backseat since the advent of online media and gadgets. Devices like kindle from amazon and mobile tablets offer a screen size from 10 to 15 inches which makes it easier for people to read news anytime and anywhere they want. Moreover, artificial intelligence is everywhere. Devices like google home and Alexa do everything from narrating headlines on the trending topics to shopping items to set the alarm with just a voice command.

The above are just examples to show how the world has transformed towards technology. The same is happening with media; one post on twitter is substantially more influential than a newspaper headline. Politicians are campaigning over social media, and people are championing causes over the internet. Nothing today earns attention than the information available on the internet or television. The same applies to advertisements, and smart advertising comes in the form of proper placement of ideas and the concept of visualisation that can be televised or put up on the internet. Therefore, promoting smartly and making good use of today's electronic media is crucial for any product, service or idea to garner visibility and gain traction.