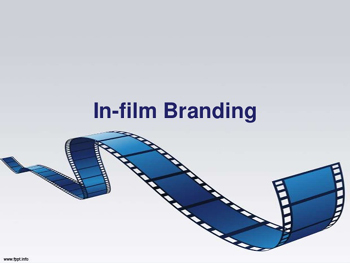 The theatre market has had an ever-increasing presence in India, with more than 8000 multiplexes across the country. The film craze is real, and it only gets bigger and better each year. With this in mind, in-film branding is one of the most effective ways of carrying out product endorsements.

In-film branding and sponsorships are a booming market across the globe, as creative artists like directors find ever-enthusiastic ways of putting your brand in the forefront and making you the hero of the movie for just a split second – enough to take the message home! A win-win plot as it is referred to, in-film branding leverages entertainment and emotions to create a psychological impact on viewers that get noticed well by the subconscious mind. Covert advertising, they are not as straightforward as celebrity endorsement but have a doubly satisfying result as the hero image is put to good use to improve your brand value.

Every company from Pepsi to Wrigley's chewing have used in-film branding as a mode of carrying the brand message to customers. While the niche is nuanced, in-film branding works best for the FMCG market.

The most endearing thing about in-film branding is that it is unmissable. Advertisements on TV, social media or anywhere else easily gets skipped, closed and fast-forwarded, but a message within the movie has 100% viewership! This unbeatable advantage is one of the essential reasons that in-film branding works so well in a country like India.

Films transcend class, culture and geographical barriers and as a result, branding within cinema is a highly motivating and positive means of advertising.