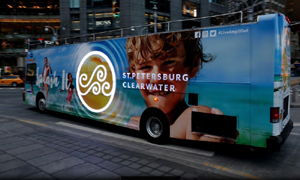 Being stuck in long lines of traffic is a daily occurrence in most cities across India. Transit media is a creative form of Out-Of-Home advertising that was invented to make the best use of daily routines and routes. Carried out on vehicles on the move, transit media includes branding that works around or inside cabs, buses, autos and even other public transport options like metros, subways and trams, hence the term transit. Sometimes brands also use dedicated transport vehicles like mini-vans with a sign-board on its trailer.

Transit media is especially useful for hyperlocal brands. For example, advertisement of a new showroom can be put up on particular bus numbers that travel in that area. These type of techniques ensure that you maximize your reach to the target demographic. Typically, transit media costs are much smaller than other forms of OOH but have a similar scope.

When it comes to transit media, you have the option to go big or small according to your liking. To make a big announcement, brands can choose to wrap the entire buses and cars. On the other hand, if sublime messages are more in keeping with your brand’s image, you can select covert areas like just the back of auto-rickshaws and buses.

With so many options that allow for coverage throughout the city without having a shell a bomb, transit media gives you a frequency and competency in the most creative ways.